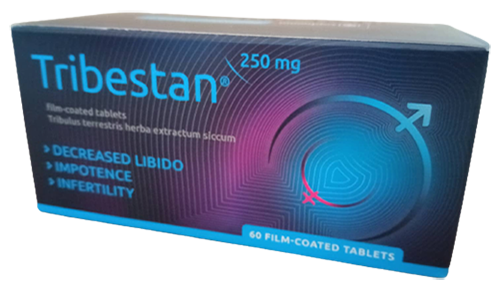 Sopharma Tribestan is worldwide used to increase the levels of the male sex hormone, testosterone. A number of athletes take it for the purpose of gaining lean muscle mass.

Sopharma Tribestan is a product of plant origin, extracted with a special technology from the Bulgarian Tribulus Terrestris plant. Sopharma Tribestan not only affects the production of testosterone, the hormone responsible for male strength, power and endurance, but also improves potency, accelerates metabolism and is a good helper for accumulating energy reserves and increasing muscle mass.

Clinical studies prove that Bulgarian Tribulus Terrestris affects the level of hormones without, however, causing disturbances in their balance. It is believed to have a positive effect on fat metabolism and the regulation of cholesterol levels. Studies indicate that it is possible that products such as Sopharma Tribestan with real Bulgarian Tribulus Terrestris have a mild diuretic effect and support the functions of the liver. It is believed that it can even help in the treatment of impotence.

Sopharma Tribestan main advantage over other similar products on the market is that it is plant-based and has no negative effects on the cardiovascular system.

This is the key not only to sexual activity and sexual power, but also to good sports achievements, strength, endurance, self-confidence and much more.

Sopharma Tribestan is available at an unbeatable price in our Sopharma Shop.

All Products
This website uses cookies to improve your experience. We'll assume you're ok with this, but you can opt-out if you wish. READ POLICYSETTINGSACCEPT
Privacy Settings

This website uses cookies to improve your experience while you navigate through the website. Out of these, the cookies that are categorized as necessary are stored on your browser as they are essential for the working of basic functionalities of the website. We also use third-party cookies that help us analyze and understand how you use this website. These cookies will be stored in your browser only with your consent. You also have the option to opt-out of these cookies. But opting out of some of these cookies may affect your browsing experience.
Necessary Always Enabled
Necessary cookies are absolutely essential for the website to function properly. These cookies ensure basic functionalities and security features of the website, anonymously.
Functional
Functional cookies help to perform certain functionalities like sharing the content of the website on social media platforms, collect feedbacks, and other third-party features.
Performance
Performance cookies are used to understand and analyze the key performance indexes of the website which helps in delivering a better user experience for the visitors.
Analytics
Analytical cookies are used to understand how visitors interact with the website. These cookies help provide information on metrics the number of visitors, bounce rate, traffic source, etc.
Advertisement
Advertisement cookies are used to provide visitors with relevant ads and marketing campaigns. These cookies track visitors across websites and collect information to provide customized ads.
Others
Other uncategorized cookies are those that are being analyzed and have not been classified into a category as yet.
SAVE & ACCEPT
Powered by